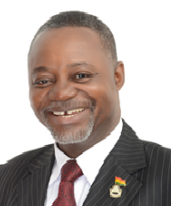 Surv. Amos Wuntah Wuni joined the erstwhile Lands Commission Secretariat for his two-year National Service after obtaining a Bachelor of Science (BSc) Honours Degree in Land Economy from the University of Science and Technology (now KNUST) in 1985. He also holds the following Degrees/Certificates –

In 2009, His Excellency the President of the Republic of Ghana appointed him DEPUTY EXECUTIVE SECRETARY (OPERATIONS) when four (4) Land Sector Agencies were integrated into the current Lands Commission (under the Lands Commission Act, 2008 [Act 767]). Concurrently, he took on additional responsibility as Acting DIRECTOR, Public and Vested Lands Management Division (PVLMD) from 2009 to 2010 before the first substantive Divisional Director was appointed.

A known advocate of good corporate land governance, Mr. Wuni inspires confidence and discipline and has championed many reforms in the Lands Commission since 1985. He strongly believes that the Lands Commission can become a centre of excellence in land services delivery.

Mr. Wuni is a Fellow of the Ghana Institution of Surveyors (FGhIS) as well as a Barrister and Solicitor of the Supreme Court of Ghana. He is happily married to Mrs. Juliana Naa Afarley Sackeyfio-Wuni, B.A (Hons) University of Ghana, PGDE (UCC) and they are blessed with four (4) adult children